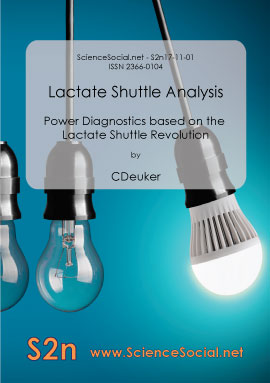 Power Diagnostics based on the Lactate Shuttle Revolution

The Lactate Shuttle Hypothesis was first published by Brooks in the ’80 [s. Brooks, G. A.; 1985b] with a radical new insight into the concept of muscle physiology: the negation of lactate as a metabolic dead end product of gycolysis due to an oxygen lack during exercise. In experimental testing the appearance of lactate in cells showed very different performance than expected through the concentration in blood. Even in resting situations, oxidative metabolisms of lactate could be found inside cells, as well as in exercise with different loads [s. Brooks, G. A.; 1985a]. Not only had the concept of an anerobic threshold come into discourse with these findings, but more fundamentally the whole explanation of muscle physiology and energy consumption. In the contemporary physiological discourse, lactate shuttles play a central role as ‘cell-to-cell shuttles’ as well as ‘intra-cellular shuttles’ [s. Gladden, L. B.; 2008] and the connection to muscle fatigue and acidosis is discussed [s. Gladden, L. B.; 2004].

All these new insights changed the principle understanding of muscle physiology, setting lactate into a central role of exercise metabolisms [s. Cruz, R. S. d. O., et al.; 2012]. In this feature, these new findings are discussed with a scope to applied exercise physiology in training. Based on these radical new ideas an innovative technique for power diagnostics is proposed. 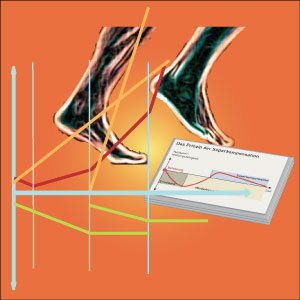 The lactate shuttle revolution started with new analytical methods in physiology, indicating that lactate is active in resting muscles as well as in exercise [s. Brooks, G. A.; 1985b; 208]. These findings are in contrast to the classical explanation of lactate appearance because of a lack of oxygen forcing anerobe metabolisms.

Testing lactate appearance under fully oxidative conditions showed that lactate is not only a product of anerobic metabolic methods in contrast to energetically more efficient aerobe processes [s. Brooks, G. A.; 2007; 342] as the classical theory tells. These findings opened the door to a new understanding of power physiology in muscles and denied the dominant and strict separation between aerobic and anerobic metabolism.

Further research showed lactate usage as an energy source in rest as well as in exercise up to 75% of total lactate appearance [Brooks, G. A.; 2007; 342]. The classical explanation saw lactate as a dead end product of anerobe metabolisms in muscles instead. With this idea of lactate as a fuel for the muscle fiber mitochondrion, the classical system of physiological energy supply turned.

And last but not least, testing showed that acidosis and the claimed reduction in muscle work is not due to lactate [s. Robergs, R. A.; 2011; 1097]. All these findings together draw a very different light of lactate and energy physiology in exercise with a new paradigm: the lactate shuttle.

A quite well known cell-to-cell shuttle, that was accepted before the discussions of lactate pyruvate metabolisms as a central issue in muscle physiology, is the Cori Cycle [s. Plowman, S. A.; Smith, D. L.; 2011; 47]. In rest, the liver removes approximately 30% of total lactate concentration decline [s. Gladden, L. B.; 2008; 479] and during exercise the net lactate balance could not be raised due to decreased blood flow in liver reaching up to 25% [s. Brooks, G. A.; 2007; 342].

Lactate usage of the brain and nerves was also detected but in comparison to the whole body uptake of lactate it is negligible [s. Gladden, L. B.; 2008; 479].

Another cell-to-cell shuttle is the net lactate uptake of the myocardial fibers, not quantified in contrast to total lactate balance in the scientific discourse, but demonstrated as a prime example for intra-cellular shuttles. The fibers of the heart are oxidizing lactate up to 60% of total substrate metabolism [s. Gladden, L. B.; 2008; 479].

Also well known before is the lactate uptake of red blood cells. This transfer is proportional to exercise impact but limited with a maximal cap of total usage [s. Todd, J. J.; 2014; 4].

In the center of all these new findings was lactate appearance in muscle fibers. Net lactate turnover during exercise is reported to rise up to an 18 fold increase [s. Todd, J. J.; 2014; 3]. The way of metabolite lactate usage is discussed as the intra-cellular shuttle, the mitochondrial lactate oxidation. Another way of lactate is the cell-to-cell shuttle as the classical well-known directions of lactate but particularly as fueling other muscle tissues.

Now the thrilling question is how all these new insights affect training and physiological power diagnostics.

For S2n members only – please log in or become S2n member.

Or bill me with email (read only for Windows with free CopySavePDF reader) €7,- for S2n-Features

share
(Visited 317 times)
Enter your email address. Only after you clicked the link in the confirmation email, we will create a new password for you.
Powered by DigiMember