Small world and the virus app 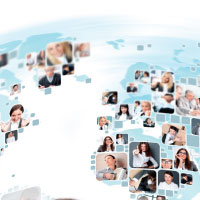 For relaxing social distancing because of corona an app for tracking contacts is in debate.

The theoretical background of the app is obvious, but the practical advice underlies the ‘small world’ phenomena of exponential growth, just like the virus itself.

Let’s take an example. The app traces our contacts during incubation time of two weeks and all critical situations are detected and stored. This is quite a long time so even with social distancing we need to go shopping or at work in this period. If we take an arbitrary number of 100 suspected contacts during two weeks, it would be necessary to do 100 additional tests for one detected corona infection. No tests in critical infrastructure, especially in the medical system, can be saved as well as all tests because of individual symptoms. From April 1. to April 18. we had approximately 4000 new cases at an average in Germany recommending 400000 additional tests for a single day.

The other possibility would be a precautionary quarantine for all suspected contacts. Quarantine is two weeks so 5.6 million suspected infectious people would have to stay at home before the first case is released.

Now one could argue that a KI system with neuronal programming could better detect the critical contacts. But these systems need training and you have to decide how many infections you accept to train the system.

Such a dimension of violating basic rights because of an app without an individual chance to follow the argumentation because of data privacy protection might be problematic in legitimation and then in reverse has minimal acceptance.